As eaters, we all have a tendency to be creatures of habit at times. In many ways, this is beneficial because it allows us to develop healthy patterns that support our health such as staying hydrated, meal planning and prepping, batch cooking, and reducing our refined sugar consumption. On the other hand, we can easily fall into cooking ruts when we’re grabbing broccoli and carrots week after week. Exploring the produce section of the grocery store and choosing the ‘out of the ordinary’ or ‘uncommon’ vegetables can yield an immense amount of culinary and nutrition benefit!

‘Out of the Ordinary’ or ‘Uncommon’ is Relative

Before we get started, we’d like to acknowledge that ‘out of the ordinary’ or ‘uncommon’ vegetables are relative terms. What’s normal to one person may seem utterly bizarre to the next. In a global context, some ingredients only grow in certain parts of the world, making them commonplace to those who live in that region and unrecognizable to those living continents away. Culture, ethnicity, and family history also play a role in the types of vegetables we are familiar with, and how we traditionally choose to cook and enjoy them.

In this post, we’re featuring some of the uncommon vegetables that you can find in many North American grocery stores, and perhaps you’ve passed them by because they seemed intimidating and unfamiliar.

Seeking out unfamiliar or uncommon vegetables allows you to:

Let’s take a closer look at some uncommon vegetables and how you can use them in your kitchen!

12 ‘out of the ordinary’ or ‘uncommon’ vegetables to try What Are They: These tubers kind of look like giant knobs of ginger and can also be labelled as ‘sunchokes’ at the grocery store. Jerusalem artichokes have a nutty, potato-like flavour, are low-starch, and are rich in fibre and iron. Jerusalem artichokes have a specific prebiotic fibre called inulin, which isn’t digested until it reaches the colon where it feeds the good bacteria in the gut. Warning: if you aren’t used to consuming Jerusalem artichokes or high amounts of fibre, this can make you very gassy! Start off with small amounts and gradually increase as needed.

How to Use Them: Jerusalem artichokes, like potatoes, are wonderful roasted, baked or boiled, sliced for chips or gratins, and they are incredible in dairy-free soups and stews.

Recipe to Try: Jerusalem Artichoke Hummus by The Green Life What Are They: Sea vegetables are edible seaweeds and they are incredibly nutrient-rich (and delicious!). You’ll commonly find them in Japanese and Asian cuisine. They are high in thyroid-supportive iodine, energy-boosting iron, blood-building chlorophyll, and antioxidants. There are multiple different varieties of sea vegetables and we have a full guide to them that you can consult if you want to learn more!

How to Use Them: Sea vegetables have a naturally salty, umami flavour. They work well in seasoning blends but also add immense flavour to noodle dishes, salads, soups, and stews. What Is It: Fennel is a sweet vegetable with a licorice-like flavour, often used in Mediterranean cooking. It’s high in fibre as well as Vitamin C, and it’s a good food for digestion.

How to Use It: You can use the bulb, stalks, and leaves/fronds of fennel, and consume it raw or cooked. Raw fennel is lovely in salads and fresh pressed juices. Cooked or roasted fennel is wonderful in side dishes, dips, stir-fries, pastas, stews, vegetable or bone broths, and pairs well with fish. What Is It: Rutabaga is an antioxidant-rich root vegetable. They’re a cross between cabbage and turnip and have quite a mild flavour.

How to Use It: Rutabagas are wonderful when roasted, mashed, or cut into French fries; they also are great when shredded into fritters. Like other root veggies, they make a very cozy soup or stew! What Is it: Jicama is a light, crunchy root veggie with a mild, sweet flavour. It originated in Mexico and is also called Mexican yam bean or Mexican turnip. It’s high in fibre – particularly inulin, the prebiotic fibre discussed above in the Jerusalem artichoke section. It also has many antioxidants to protect our bodies from damage.

How to Use Them: Jicama is often consumed raw, cut simply into apple slices or carrot sticks. It is often julienned into matchsticks for slaws, salads and for a crunchy taco topping. You can also bake or stir-fry it, and it’s often used to make fries. Photo: The Matter of Food from Unsplash

What Is It: Kohlrabi has a sweet, cruciferous flavour; basically it tastes like a mix of cabbage and broccoli. Kohlrabi is rich in minerals like calcium, iron, potassium, and magnesium, and has anti-inflammatory properties. You may only see the bulbs at the grocery store, but if you can find kohlrabi with the leaves still attached, you can use them like any other dark leafy green.

How to Use It: Many people prefer to eat kohlrabi raw in salads and coleslaws, or as a crunchy crudité to pair with dips and spreads. Others love to enjoy it roasted or mashed, incorporated into soups or stews, or shredded into veggie burgers or fritters. What Is It: Though technically a fruit, okra is enjoyed as a vegetable. It originated in Ethiopia and spread across the globe and to North America by slaves. It’s grown in hot climates and is used in many African, Caribbean, and Indian cuisines, as well as in the cooking in the Southern United States. Okra has a slimy, mucilaginous property that makes people love or hate it; but this mucilage fibre is excellent for gut health.

How to Use It: Okra is typically used in stews, where it can be cooked for longer, or is fried. You can also pickle it. 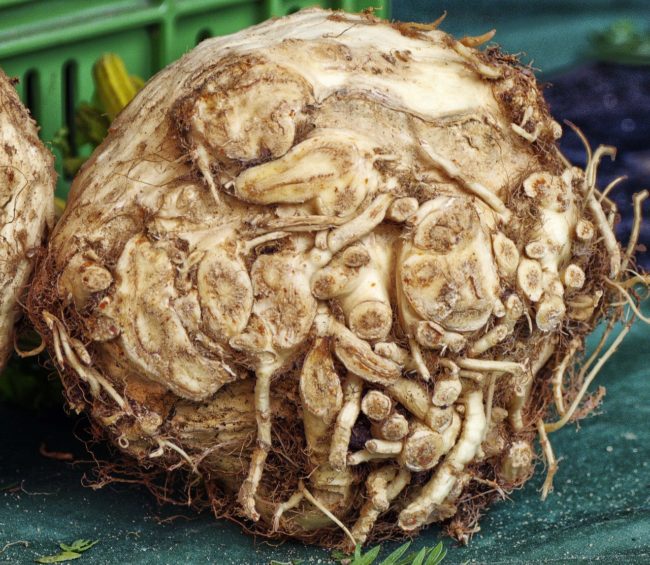 What Is It: Also called celeriac, celery root has a mild, sweet, and celery-like flavour, with parsley undertones. In addition to B vitamins and fibre, celery root is a decent source of Vitamin K to support bone health and prevent blood clots.

How to Use It: As with other root vegetables, celery root is wonderful in soups and stews, roasted or mashed, or used in salads and slaws. You’ll have to peel away the gnarled bits on the outside, but the inside is smooth and creamy. What Are They: Also called ramps, wild leeks are only around for a short period in the springtime. They are basically the first sign of spring! Wild leeks are a cross between onions and garlic with an extra bit of sweetness thrown in for good measure and have a milder flavour than traditional onions and garlic. Health-wise, they are beneficial to the detoxification process and contain quercetin, an antioxidant that has anti-histamine properties that can help alleviate allergies, hay fever, and asthma.

How to Use Them: Wild leeks can be enjoyed raw, pickled, or cooked. Toss them into a spring salad, use them in soups, pestos and stir-fries, or you can dehydrate them and grind them into a powder. Basically, anywhere you’d use shallots or scallions, you could easily sub a wild leek instead! What Is It: Daikon is a type of radish and its name means ‘large root’. It’s used frequently in Japanese, Chinese, Vietnamese, and other Asian cuisines. It is large and white and has a milder flavour than other radish varieties that can be quite peppery.

How to Use It: Enjoy Daikon raw in salads, roast or braise it, or cook it into Daikon cakes. It is also commonly pickled. What Are They: Yes, these are a fruit, but we’re including them in this list because they have so many savory contexts. Plantains are part of the banana family, but they’re not the kind of banana that you would throw into a smoothie or oatmeal, or peel and eat on its own. Plantains are quite starchy, are very firm when green, are eaten at varying stages of ripeness, and are typically cooked. They are an essential part of West African, Central African, Caribbean, and Central and South American cuisines.

How to Use Them: Plantains are delicious when sliced and baked or pan-fried. There is an extensive guide to plantains here that covers all the bases.

Recipe to Try: Baked Kelewele by The Canadian African What Is It: Bok choy can also be called pak choi or pok choi. It’s native to China and used in Chinese cuisine but has now spread across the world. It’s a Chinese cabbage with a fairly mild flavour. Baby bok choi is harvested earlier, so it’s not only smaller but more tender and mild than the full grown version.

How to Use It: Bok choy is delicious stir-fried, baked, or seared on its own as a side dish, or incorporated into noodle dishes, soups, stews, and broth recipes.

Root vegetables are a family of strong, hardy plants that grow in the ground. They’re typically sweet and starchy, which makes them a very delicious…

Whether you’re vegan, paleo or omnivorous, the key tenet of these types of diets is eating more vegetables. But that’s easier said than done, especially…

Eating for optimal health doesn’t have to mean major and painful changes to our diets (give up ice cream… forever? Never eat white potatoes again?)….

Cabbage isn’t a vegetable that normally gets a lot of love (we haven’t heard many people name it as their favourite veggie!). As a card-carrying…

Whether you follow a vegan diet, vegetarian eating style, or simply love to eat more plant-based foods, vegan meat substitutes are a popular and delicious…

No one among us is utterly immune to inflammation. Even the healthiest people are tripped up at times by a cut on their finger or waylaid…

Read More
More Wisdom in How To